This RFC sets the plan for Ember Data's medium term development, on the path towards modularizing the library. We expect the following immediate design and implementation work to take between one and two quarters. The main goals are:

Ember Data needs to continue to evolve with Ember and the wider Javascript ecosystem and provide a modern first class data handling support. Moreover, we want to reach the future in which using ED is a much more modular and composable experience. In order to do this, we need to create a foundation for future development while making sure we are honoring our stability guarantees and helping the ecosystem evolve together with us. The two main motivations for this RFC are:

In order to provide Ember users with a future proof data stack, ED has to mold and adapt. A sample of requirements for a modern data library for Ember include:

Ember Data should incrementally evolve to support all of the above with full backwards compatibility. However, evolving a complex codebase over time while maintaining compatibility has always been a tricky endeavor abound with tradeoffs. In the 3.x cycle there have been several angles of attack towards exploring the future of ED.

While some of these efforts are experimental spikes and others have seen production use, we want to bring their ideas and improvements back into ED proper. The first motivation for this RFC is to design our internal architecture so that we can iteratively move the library in that direction. We have already done the first part of this work, refactoring the bulk of in memory data storage into a pluggable RecordData interface and now need to spread that approach to the rest of the library.

However, we will not succeed in delivering this future vision in a timely manner and bringing it's benefits to our existing body of users if we do not improve our velocity and stability.

Ember Data has continuously evolved over seven years and over time acquired several layers of cruft along with a intimately connected internal architecture. The current state of the library is not particularly hospitable to new contributors while at the same time being hard to iterate on in a stable manner. Lots of Ember Data's public apis have been designed with stability and extensibility in mind, but the internal layers of the library have not benefited from the same amount of design work. The unspecified internal layers together with a host of implicit dependencies make it hard to expose parts of Ember Data to addon developers as well as prevent ED contributors from being able to easily do experimental iterative work.

The three main problems this internal structure causes us is:

We have already begun some efforts to address these problems: incremental conversion to Typescript and the RecordData refactor stand out as biggest value adds.

A great example of how these issues impact us are the problems one runs into when trying to remove ED's dependency on DS.Model and Ember's object model. In a perfect world, if we wanted to ship ED that used ES6 classes instead of DS.Models, we would adopt an incremental approach:

However, this is currently very hard to do in the ED codebase, because the whole system is littered with both explicit and implicit assumptions about record's intimate apis and it's class structure. The implicit assumptions throughout the codebase of how a record behaves are especially challenging to reason about and test.

Success criteria for this plan is shipping an Ember data release which:

While the internal apis and interfaces will be designed with an eye towards the future public and addon use, in this phase of the work we will not be exposing all of them to apps and addons as fully stable public apis, or we will do so for addon author with an explicit plan to deprecate and replace.

Moreover, as part of the RFC we will not be deciding on, or baking in the future app level public apis.

The high level plan is to refactor the ED internals so that:

In a typical Ember app, Ember Data sits as a layer between the application code which issues queries for data, reads and manipulates the results and the browser fetch or websocket interface. You could model a typical use of ED at a high level as :

However Ember Data's architecture currently is quite a bit more complex: 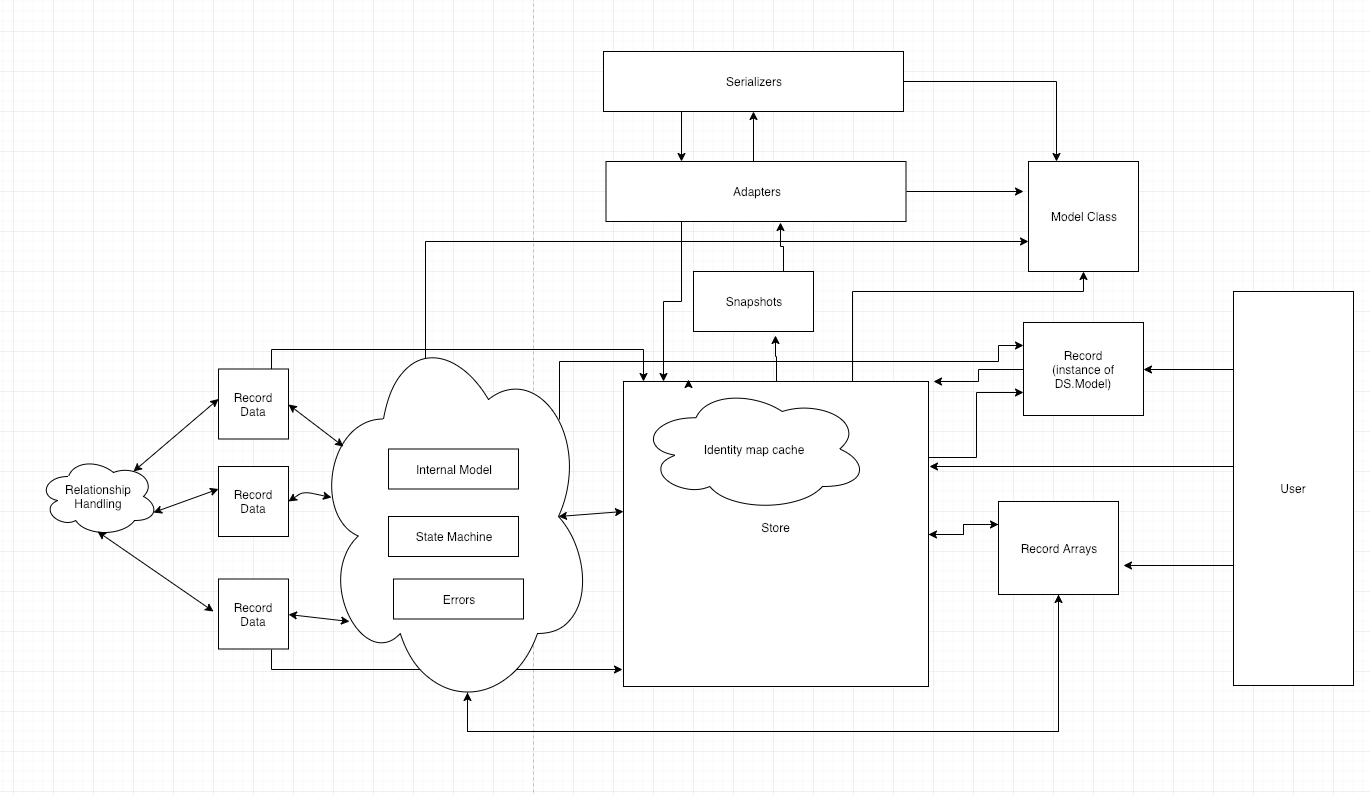 While the overall shape of the architecture looks as you might expect, our current implementation suffers from several critical problems:

This medium size ball of mud should be refactored to the following high level pieces: (add diagram here):

this is a high level design, each of these would correspond to an RFC

Adapter, Serializer and Snapshots would not have major changes at this time, other than those needed to make use of the schema service and public apis for accessing records.

It is important to note that none of the existing public user apis would change, and that the bulk of this work is taking existing code structures and making the specified and isolated.

What level of future support should we commit ourselves to with the new apis?